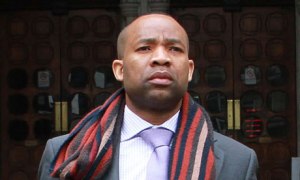 Robert Haye flouted the benign British “Don’t ask, don’t tell” policy towards people with opinions that are not approved by the government.

As a homophobe, Robert Haye’s job was safe, as long as he remained in the closet.  He would have been perfectly within his rights to have given a detention to whichever students in his class of fifteen and sixteen year-olds had pestered him to know whether he was homophobic.  They had, after all, violated the “Don’t ask” rule themselves, the first half of the “Don’t ask, don’t tell” policy.

Instead of stifling any discussion of homophobia in the classroom as he was apparently required to do, Mr Haye responded by violating the “Don’t ask, don’t tell” policy himself.  Asked, he told, thus breaking the second of the rules of the policy, “Don’t tell”.   In his honesty, he outed himself as homophobe.   He even outed himself as a Christian, a confession arguably even more dangerous, for a science teacher to make.

Mr Haye should have stone-walled the impudent enquiry.  As somebody now openly Christian and homophobic, Mr Hayes quickly discovered that he had forfeited the safety which he had enjoyed whilst he had remained in the closet.    He had stepped out from beneath the shelter of the “Don’t ask, don’t tell” umbrella.   It had become inevitable that his comeuppance would rain down upon him, and rain it did.

Mr Haye will almost certainly never be allowed to work as a school teacher in this country again.

The “don’t ask, don’t tell” policy was pioneered in the United States of America, where it was applied to people serving in the armed services, who self-identified as having homosexual or bisexual sexual orientations, or who practised homosexuality.  The policy has been adopted and adapted throughout the UK, where it is nowadays applied to workers with opinions with which the government or their own private sector employers disagree, but who nevertheless need to work for a living somewhere.  This generous, merciful policy provides complete protection from victimisation for all those with dissident beliefs, as long as they keep their mouths shut about their beliefs, in the workplace, or anywhere else (such as on social media) where workplace colleague would-be informers might discover their secret perverted opinions, and denounce them.

Which part of the expression, “Don’t ask, don’t tell”, is it so hard for these Christians, homophobes and other dissident minorities to understand?  Why do these and other non-mainstream free-thinkers insist on being in the faces of normal people, by admitting to their dissident beliefs openly, instead of taking advantage of the fair-minded “Don’t ask, don’t tell” toleration offered to people like them, if only they will just learn to keep their disgusting opinions to themselves?

You mark my words:  They’ll be holding “pride” parades next, demanding a new policy that makes even more generous accommodations to minorities like them.  More generous, that is, than the present, perfectly reasonable “Don’t ask, don’t tell” policy of toleration shown towards silent dissidents.  They’ll be demanding equality for different opinions next, if we don’t watch out.

Oh, wait a minute … isn’t “pride” a sin?  Well, in that case, they’ll have to think of something else to call their “pride” parades instead, won’t they?  I know: How about calling them “Not Ashamed” parades?  That’s got rather a nice ring to it.

If you enjoyed this, you might also enjoy these other posts:

B*ggers CAN be choosers!