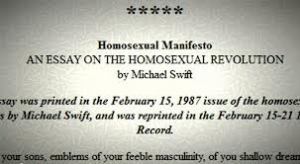 published in Gay Community News, 15-21 Feb. 1987, often referred to as “The Homosexual Manifesto”.

You will probably enjoy this more, if you read Swift’s original essay first, re-published here, by Jesuits.

Trigger warning added later: Please do not read this piece at all if you are likely to be offended by the hate speech of Michael Swift in his original 1987 essay, of which this a parody.

This essay is an outré oasis of sanity, a triumphant, benign fantasy, an eruption of inner love, joy and peace, on how the oppressed desperately dream of a world where nobody is persecuted for “thought crimes”, not even homophobic people.

We who are homophobic shall rectify your miseducation of our sons about sodomy (I hope before you get around to sodomising too many more of them).  Our sons are the pride and joy of our under-valued masculinity, of our noble dreams and lasting truths.  We shall rescue them from you in our schools, in our dormitories, in our gymnasiums, in our locker rooms, in our sports arenas, in our seminaries, in our youth groups … (etc) … wherever men are with men together.  Our sons shall be educated and free and make their own fully-informed lifestyle choices.  Many of them will (or so many of us hope), show by their lives that they remain cast in the image of God, no less. They may well come to crave and to adore Him.

All laws banning homophobia will be revoked. Instead, legislation shall be enforced which upholds our freedom of thought and expression.

All homophobic people must stand together as brothers; we must be united artistically, philosophically, socially, politically and financially. We will triumph only when we present a common face to our illiberal, intolerant and spiteful persecutors.

If you dare to cry bigot or homophobe at us, we will giggle at you, because we know in our hearts that we are free men, entitled to think any thoughts, express any ideas, we wish.

We shall write poems of the love of men for freedom; we shall stage plays in which man openly expresses his beliefs to man and nothing bad happens to him at all; we shall make films about the virtue of heroic men which will complement the cheap, superficial, sentimental, insipid, juvenile, pro-gay propaganda presently all-too prevalent on our cinema and television screens, even the broadcasts of our televised Parliament.  We shall sculpt statues of whatever those of us gifted in sculpture feel like sculpting (and will generously allow you to do the same).  The museums of the world will be filled with anything and everything that the museum management consider worthy to occupy exhibit space.

Our writers and artists, and yours, will write and make whatever they damn well want, and we will strive to protect their artistic freedom, and yours, because we’re not mean or hateful, just homophobic.  We will fight tooth and nail against the present persecution of homophobic people through usage of the devices of wit and ridicule, devices which we do not need to be “skilled” in employing like you, when ridiculing such an easy target as your spoilt-brat intolerance.

We will embarrass the homophobic people who have traded principle for a small measure of power, behaving as intolerant zealots, out of fear of the gay lobby.  People will be surprised and amused when they find that their presidents and their sons, their industrialists, senators, mayors, civic leaders etc, are hypocritically playing safe, by outwardly posing as politically correct, whilst secretly being just as homophobic as the rest of us.  Homophobic people are everywhere; we have no need or desire to infiltwate your ranks.  Be careful when you speak ill of homophobic people because we are always among you; we may be sitting across the desk from you; we may be sleeping in a bed near you, but hopefully not too near.

There will be a return to good old British compromise. We are probably not all middle-class weaklings, but what matter if we were? We are not all highly intelligent, still less “the natural aristocrats of the human race”, though at least we aren’t doing anything as unnatural as you advocate.  We don’t hunger for power like you, only for our lost freedom.  Steely-minded liberals or libertarians, even those of us who happen to be homophobic people, never settle for less than liberty. Those who oppose our right to our opinion will be therefore be patronised, and frowned at, and sued if they keep on causing us trouble.

We shall not need vast private armies to defeat you; reason alone will do the trick.  Homophobic people as a demographic group don’t typically want to conquer the world themselves, because most of us don’t want anybody to conquer the world, least of all your lot.  Your rhetorical “warriors” who you said were “inspired by and banded together by” homosexual vice and dishonour were not “born gay”, they were born losers.  You will one day be as dead as is every one of those ancient Greek soldiers of your perverse fantasy.

The family unit – admittedly occasionally the spawning ground of lies, betrayals, mediocrity, hypocrisy and violence, but far more often of truth, loyalty, excellence, sincerity and love – will surely survive your tantrums.  The family unit, which seldom  “dampens imagination” as you claim, nor “curbs free will”, will therefore never be eliminated, I predict.  (Perfect boys will be conceived and grown in the genetic laboratory, you say?  My my, you really meant what you said about your essay being a “madness”, didn’t you?  Bonded together in communal setting, under the control and instruction of homosexual savants?  Over our dead bodies!)

All churches who condemn you will probably thrive, and win over the likes of us who are not presently church-goers at all.  (Churches that condemn us will not be as successful.)  Different homophobic people have different gods, or none.  We have nothing against handsome young men, even though we will never worship them.  Some of us are handsome young men ourselves (but not me, alas).  It’s just that they are homophobic handsome young men.  (So, if you say that one of us has a beautiful body, don’t expect him to hold it against you, darling.)

As a matter of fact, we quite like beauty, both moral and aesthetic, ourselves.  (That is exactly the reason why many of us are the homophobic people we are in the first place.)  We do not expect realistically to be able to annihilate all that is ugly and vulgar and banal, and nor should you.  We don’t necessarily agree with one another in the first place, as to what things are ugly or vulgar or banal, apart from homosexuality, about which we do agree.  We don’t even expect to “annihilate” homosexuality, just to be free again to disapprove of it.   We are alienated from present day middle-class pro-gay conventions, but we remain free to think our own thoughts privately, guided, for example, by the dictates of pure conscience and aesthetic sense.  And we intend to emancipate ourselves from your slavery, becoming free once again to express our homophobic thoughts, without fear of reprisals.  For us, too young to learn about your vile habits is what we consider many of our own sons still to be.

We are not expecting an exquisite society to emerge.  We can barely imagine a worse government, for any society “exquisite” or otherwise, than one composed entirely of “gay poets”.  (Well, not on this earth.  Perhaps the planet Uranus?)  Any man contaminated with homosexual lust will be barred from talking on and on and on about it endlessly, posing as a “victim”, boring the pants off the rest of us.  We will do our best to ignore all males who insist on remaining stupidly homosexual.  We are homophobic people.   That’s what we do.  That’s who we are.  That’s how we want to stay.

We shall expect history to continue being “rewritten”, by all sorts of people, including people like you, Michael Swift, as it always has been.  But we will challenge homosexualist lies and distortions.  A few of us might (occasionally) “portray” the homophobia of “the great leaders and thinkers who have shaped the world”.  We will certainly protest whenever academics are fired, for discovering that homophobia is inextricably linked with intelligence and imagination, or that homosexuality isn’t, despite your bold claims.

We shall probably be victorious eventually, but, unlike you, we are not fuelled by “ferocious bitterness”.  We are merely weary of being persecuted and maligned.  We have been bombarded with your dumbed-down, politically correct diatribes and insults for too many decades, perfectly able to see from the outset the absence of joined-up thinking in your propaganda.  We too are capable of firing guns and manning the barricades of the ultimate counter-revolution.  But why should we have to use guns, when we have reason and good old-fashioned liberal/libertarian values on our side?

Tremble, pro-gay swine.  We who are proud to be homophobic people intend to rip off your masks, and show you for what you are, to the whole world.  Our day will come.  One day, we will no longer lose our jobs, or our children, our liberty, or our lives, because of your disapproval of our disapproval of your craving for our feigned approval, at any cost to our consciences, of your favoured vice.

And please don’t even think of sodomising either of my sons, or I’ll scratch your ugly eyes out, duckie.

4 responses to “The homophobic manifesto”