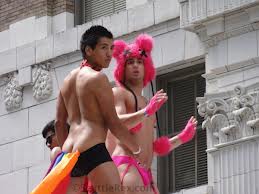 It is argued by some who identify as Christians, that Christians should “apologise” to “LGBT people”, and march with them on their Pride marches, using this as an opportunity to share the gospel of Christ with them.

There appears to some biblical support for this new doctrine in the following passage from the recently-discovered Gospel according to St Judas.

16  And when he was come to the temple, seeing the long queues at the tables of the money changers and those that sold sacrifices and that they were sore harassed by the impatient multitudes who would do business with them, he spake unto them saying, ‘Hey, can I and my disciples come alongside you guys and help you in what ye are doing, that ye might do whatsoever your hands find to do with all thy might in less time and with less stress?’

17  And they replied unto him saying, ‘Oh cheers, mate. That’d be really great for a change. Provided that thou and thy disciples can count up to a hundred and are not given unto thieving of course.  We don’t get many trade enablers round here like thee. For surely thou knowest how many of them that are religious do hate us and condemn us and hitherto have persecuted us, scourging us with whips, besetting our shops and turning upside down our tables, spilling money and merchandise hither and thither.  It hath been verily annoying.’

18  And he replied unto them. ‘No worries, brethren, for I preach and we do all practise honesty;’ (for it was so: especially the disciple whom Jesus loved, the one who looked after the money in those days, of whom it was later said falsely that he did embezzle from the kingdom ministry) ‘moreover, I and all of my disciples have been examined in Aramaic and Arithmetic, attaining grade C or above in both.’ (For it was so.)

19  And one of them said unto him, ‘Is it a problem that some of the lambs we sell for the sacrifice are really piglets, with wool glued onto them? For they be trans lambs.’ (For in those days some of the teachers of the law still took literally what Moses had taught, that it is not lawful to admit swine into the house of the L_RD.)  And he looked upwards, towards his father that is in heaven, whistling nonchalantly and smiling, as though he heard him not.  And he that had enquired thus of him, did then take that for a no.  And thus it was said abroad also from that day forth.

20  And so it came to pass that the Lord and the twelve did come alongside and did labour until dusk for the money-changers and them that sold livestock, both clean and (it was written) unclean (technically) for the sacrifices, in the manner of unpaid volunteer retail staff who labour likewise wherever trade those who would raise mammon to give in alms to the poor or pay for cancer research and suchlike.

21  And when they had holpen them thus, they (who just happened to be trade-oriented people and did not choose that way of life) did know that he loved them and they put their faith in him; thus did they also partake that day of the salvation that he would purchase for them, by his sacrifice of the thirty pieces of silver that they chipped into a whip-round for a love offering unto him, because he had holpen them so greatly, encouraging them in all that they were wont to do.

22  And, seeing this, the scribes and the Pharisees and the teachers of the law who had hiterto been sore aggrieved, and sought opportunity to lay hands on him and hand him over to the Romans to be crucified, were amazed and straightway thought he was OK after all and believed on him also, and proclaimed him to be the King of the Jews, and did prevail upon Pilate to bestow that title upon him; which he did.

23  And from that day forth, did they all live happily ever after. Amen.

Pigs, schmigs, what does it matter if everybody is nice and kind and polite and non-judgmental?