Boris Johnson “acted unlawfully”. ~ Does that make him a criminal? 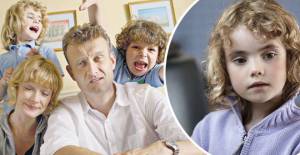 “Mummy-eee … it said on the news that Boris Johnson had acted unlawfully.  Does that mean he’s a crook and will have to go to prison?”

“I don’t know, darling.  Mr Corbyn and his party will have to decide that.  Let’s wait and see what they say.” 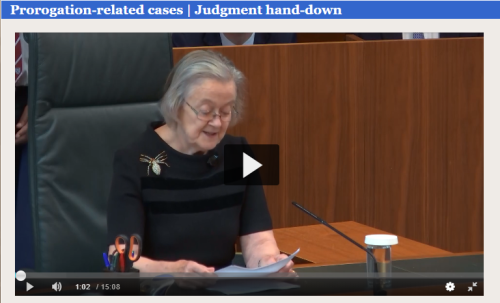 Read the official summary of the judgment yourself

Read the official judgment in PDF or HTML format

When a public official loses a judicial review court case, it isn’t normal for a virtual lynch mob to assemble, howling demands that he should resign, or be sent to prison, or fall upon his sword, or worse.  Why then has this sort of hatred been poured out in the chamber of the House of Commons, following the ruling of the Supreme Court – the “highest court in the land” as the BBC likes to whisper in awe – that Boris’s recent prorogation of Parliament was unlawful?  The spectacle of this pack behaviour has been a sorry sight.

It is right that some degree of blame and embarrassment should attach to any official who makes any wrong decision.  How senior the court had been that pinned the blame on the culprit is not a reliable metric though, for gauging how blameworthy an impugned decision was.  On the contrary, Boris must have taken a decision that was almost okay, if the case against the decision had to go all the way to the Supreme Court to get a ruling that the decision wasn’t okay after all.

I have some observations of my own on this news-story-of-the-week.

This was an unusual case, a merger of two cases in the Surpreme Court that had started in two different countries and taken different routes.  A Scottish court had ruled that the prorogation could be reviewed judicially.  An English and Welsh court had ruled that prorogation couldn’t be reviewed judicially.  The final judgment had to borrow from both judgments, neither of which the Supreme Court found satisfactory in themselves, in order to produce the desired outcome.

The Scots court had made a finding of fact that Boris’ particular propagation had been unlawful because Boris had a bad motive and lied to the queen.  That’s why it ruled that Boris decision to prorogue Parliament had been wrong.

On learning this I tweeted:

How do the Scottish judges reckon they can guess what the PM said to the queen behind closed doors, or at least that it wasn't true (whatever it was)? Clairvoyance? When shall they three meet again? pic.twitter.com/Z5zumbUXH0

The Supreme Court didn’t uphold the Scots finding of fact that Boris had had a bad motive and/or had lied to the queen.  If it hadn’t been for the parallel case in England and Wales, the Supreme Court might have simply overturned the Scottish decision, and Boris would not have been found to have acted unlawfully.

The English and Welsh court had been asked to rule that the prorogation had been unlawful for a different reason: because (it was pleaded) Boris hadn’t given a good enough reason for deciding to prorogue Parliament.  The English and Welsh court mused that it did indeed seem more than possible that Boris hadn’t had a good enough reason to decide to prorogue Parliament.  But, taking the opposite view from the Scottish court on the question of jurisdiction, it ruled that none of that political mischief was the law‘s business.  Prorogations couldn’t be reviewed judicially and that was that.  So far, so good for Boris. 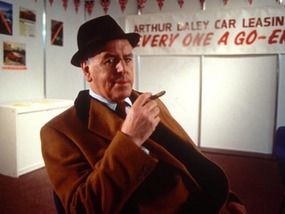 The Supreme Court’s ingenious manoeuvre was like the welding together of one “cut and shut” car from the remains of two wrecked insurance write-offs, accident-damaged at opposite ends.  Unanimously they welded together the reason for the decision being unlawful that the English and Welsh court had smiled upon (but not used, because that court had thought it had no jurisdiction at all to review judicially decisions to prorogue Parliament) and the jurisdiction the Scottish court had found it had, which the Scots judges had gone on to misuse, because of their lordships’ apparent delusions of their being able to read silent Boris’s mind and to overhear his secret conversations with the palace.

Boris was found easily enough not to have had a good reason for proroguing Parliament, because he didn’t bother to offer the court any reason at all for his decision to prorogue Parliament.  At least not in the form of a witness statement on which he could have been cross-examined.

Boris had believed that he didn’t have to go into the witness box to save his bacon, because he took his lawyers’ advice.  His lawyer’s advice was that the English and Welsh court’s ruling that a Prime Minister’s political decision to prorogue Parliament wasn’t reviewable judicially, would be upheld by the Supreme Court.  (It wasn’t.)  Boris assumed wrongly that he could safely take the 5th and that is what he did, comprehensively. 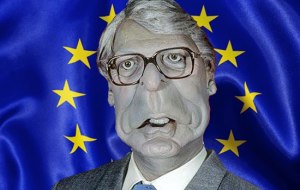 Boris might have got away with stonewalling the court, but that John Major provided a witness statement (which I admit I haven’t bothered to read).

I dare say this went on and on about what prorogations were usually like and why they were needed sometimes, for what good reasons, and how long they typically lasted.  This created a low hurdle for Boris to jump, to prove that he’d made the sort of reasoned decision to prorogue that even good old John Major himself might have made, which Major’s uncontradicted evidence presumably said everybody except Boris knew was proper.

The PM failed to jump even that low hurdle, because he still didn’t provide a witness statement.  All his eggs remained in one basket.  He stuck to his guns.  Prorogations were never judicially reviewable, his lawyer had told him.  He didn’t need to testify.  That’s what the English and Welsh court had ruled.  There was no need for him to take the stand about something that couldn’t be any of the Supreme Court’s business because the High Court of Justice of England and Wales had already ruled it was none of the law‘s business. 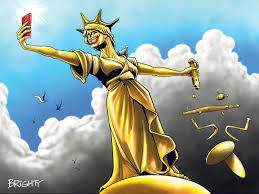 So, the Supreme Court was able to decide what much of the public wanted, which is no doubt good for its image.

The Scots court had been wrong to make findings of fact of bad motives and lies.  So far, so good.  But the finding of fact the English and Welsh court didn’t quite make, that Boris hadn’t a good reason to prorogue, was now straightforward to “prove”.

Boris played stone again in the Supreme Court, which had beat scissors first time round.  But in the final round Miller played paper – the witness statement of John Major – and paper beat stone.

Boris hadn’t gone into the witness box, but John Major had, so, on the balance of probabilities, the court simply had to find it more likely than not, that Boris, albeit quite possibly with good motives and without lying to the queen, had (at best) a secret reason to prorogue that can’t have been good enough.  He hadn’t offered any reason at all (at least, not in a witness statement), let alone a reason that met the (brand new) lawful criteria.  The criteria, that is, that a former Prime Minister and himself an erstwhile proroguer of Parliament, John Major, had suggested were the right criteria for a court to apply when wishing to test the lawfulness – the adequacy – of another Prime Minister’s political reason for proroguing Parliament.

The Supreme Court found that Boris had acted unlawfully.

At this news, Her Majesty’s Opposition has gone wild. They seem not to be willing to acknowledge the truth, that ruling that Boris “acted unlawfully” in the context of a judicial review – particularly of a type of political decision that has never been subjected to judicial review before – isn’t the same as ruling that he “broke the law”, still less that he “is a criminal”.

Boris “broke” (if they insist on putting it this way) an unwritten law of the Common Law, which only existed the day he broke it in an entirely theoretical sense.

It is said that judges never make Common Law laws, they just discover them and declare them.  The law Boris broke, which in British constitutional theory has been waiting to be discovered for almost a thousand years, ever since the Common Law itself was discovered, only ended up getting written down for the first time in history several weeks after Boris had (as it were) “broken” it.  Boris was as much in “uncharted waters” as the rest of us when he “broke” the law nobody knew existed yet.  The law he broke only got made up – sorry discovered – as a response to two rather political lawsuits.

Boris was unlucky, like Charles I.  He trod, in effect, on a hidden landmine, a piece of retrospective legislation yet to come – sorry I mean a retrospective declaration.  Even our independent judiciary themselves needed to discover this new-to-us and new-to-them ancient law, buried deep inside the Common Law.  That is, if the outcome that so many were longing for was going to be achieved as elegantly as it finally was.

I am quite impressed with the Supreme Court decision myself.  (A more learned post than this, which Matthew Scott published before the Supreme Court hearing, persuaded me of the wisdom of the court jumping in the direction it finally did.)

But I don’t think of Boris too badly because of this rap over the knuckles.  Judicial review is an occupational hazard of his job.  His political enemies show their ignorance when they conflate two completely different types of acting unlawfully, Wednesbury unreasonableness and the commission of what Americans call “felonies”.  They argue, implicitly, thus: that Boris acted unlawfully, bank robbers also act unlawfully, therefore Boris is a bank robber.   That that is a logical fallacy, and why it is a fallacy, is surely manifest, even to Jeremy Corbyn and the sort of people whom he impresses.

Please, Opposition, just calm down, all of you.  Mr Speaker, please make them calm down.

Parliament is sitting again.  Isn’t that what you wanted?  Use the time wisely to scrutinise something, if you can think of anything left to scrutinise that you haven’t already scrutinised to death, rendering those of us who watch Parliament TV bored to tears.  Stop ladling out hysterical hype ad hominem against one individual, Boris Johnson.  It makes you all look vicious and (frankly) a bit daft.  Please grow up. 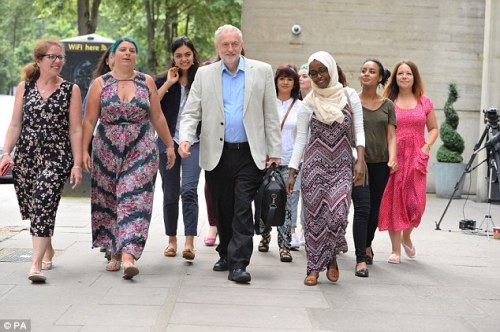 And another thing, Mr Corbyn.  Get your act together.  Holding another referendum, in which Leave has been taken off the ballot paper?  With a policy like that, how do expect anybody who voted Leave in 2016, to vote Labour in 2019? 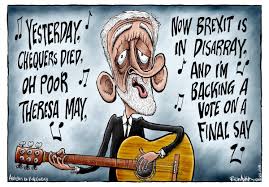