Thinking outside the botch

What should happen to a baby born alive after a botched abortion?

That is a question that has  stirred passions in the USA recently, what with this one minute-long political TV ad

Maybe, “What should happen to a baby born alive after a botched abortion?” is the wrong question.

END_OF_DOCUMENT_TOKEN_TO_BE_REPLACED

The mumbo-jumbo of choice

“We can accept that the embryo is a living thing in the fact that it has a beating heart, that it has its own genetic system within it, it’s clearly human in the sense that it’s not a gerbil and we can recognise that it is human life… but the point is not when does life begin but when does it actually start to matter.”

I was asked, yesterday,
“Are you saying that both the pro-life and pro-abortion lobby engage in ‘mumbo-jumbo’? “
–
Yes.  That was exactly what I had been saying.  Both lobbies are guilty.
–
Beyond a doubt, some members of the pro-life lobby do engage in what others will inevitably see as quite outrageous mumbo-jumbo, and rightly so.  The pro-choice lobby do not recognise their own mumbo-jumbo, which is more carefully concealed.  Even those who actively believe in the pro-choice mumbo-jumbo, seem blind to the fact that what they believe in, is actually just a different kind of mumbo-jumbo.
–
A tale of two demos
–
I have recently watched on video two sets of demonstrators in London, confronting one another. On one side of a barricade guarded by police, there was an angry, howling, jeering, guilty-looking mob, who didn’t seem to show any understanding as to why they were in the wrong.  On the other side of the barricade, there was a quiet, seemingly dignified, but ultimately misguided and embarrassing, procession of self-righteous-looking religious zealots, who didn’t seem to understand why they were in the right.
–

END_OF_DOCUMENT_TOKEN_TO_BE_REPLACED

These are the lyrics of a song I wrote over a year ago.  When I sing it, I set it to a slow country and western tune, similar to the one for the song D-I-V-O-R-C-E that was performed by Tammy Wynette.  (It was partly that song that gave me the idea for this one.)  It’s a song about a particular type of bereavement, and regret. The first chorus has alternative versions, for US and British audiences, respectively.

My baby girl is three years old,
My eyes, her mummy’s hair.
She doesn’t know, must not be told
’bout her brother, who isn’t there.

Her mum and I, we often cry,
’bout the days we met, in school
And we were blessed with a baby boy,
Who’s daddy was a fool.

She’s brought us joy, but I have cried.
My heart has been so torn
Because our son, her brother, died
Before our girl was born.

He didn’t live long.
He’d done no wrong.
We thought he’d have to go.
Oh how I wish I’d never heard
Of folks called Wade and Roe.

He didn’t live long.
He’d done no wrong.
To us he didn’t seem real.
Oh how I wish he’d never been born …
… that MP, David Steel.

She’s brought us joy, but I feel pain,
For the brother she’ll never see.
I weep with shame that our son was slain.
Who killed him?  It was me.

I’d hold my son like I hold his sister
If I had my time again.
I wish we’d stopped that A B O
R T I O N. 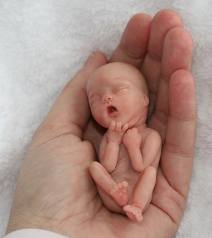 He didn’t live long.
He’d done no wrong.
They tore him limb from limb.
No matter how many more children I have,
They’ll all remind me of him.