I am the Christian Peoples Alliance (CPA) candidate in the North Cornwall parliamentary constituency, in the British general election on 8th June 2017.

I live in Launceston.

The CPA is fighting 31 seats nationwide at this election.

Please follow this blog during the election period, to receive a free, no-obligation email every time news about my election campaign is posted here.

(The “Follow” widget, where you can enter your email address before clicking, should be to the right and above this sentence, on this, and every other posting on on this website, unless you are already following the blog.)

Why am I standing?

At first I was dismayed at the tedious news that Mrs May wanted to put us through another general election, so soon, and that Jeremy Corbyn was minded to co-operate with her to make that possible.

Soon after the news broke, though, I visited the present leader of the CPA, Sidney Cordle (MBE), at his home, offering my services to help with the CPA’s campaign generally.  Sidney turned down my offer to help in that way.  Instead, he pressed me to stand again as a candidate here in North Cornwall, but this time as a CPA candidate.

I satisfied myself that the CPA was still pro-family.  So the CPA will support the Restore The Family policy that is dear to my heart.  I also found that I agreed with the CPA’s other policies.  That shouldn’t be surprising, because they are derived from the same Christian values that I hold.

Christians (and everybody else) ought to be egalitarian, not elitist.   Everybody is equal.  Please don’t believe the illogical modern doctrine that many MPs believe, the doctrine that some human individuals are less important than others.

Especially, please reject the cruel doctrine that a human individual starts and ends his (or her) one, indivisible, human life, comparatively unimportant.  Unimportant, that is, compared with how important that same individual will become, or used to be, around the middle of his or her life, when anybody’s importance is at its maximum (according to the doctrine).   That is what many believe nowadays, but it’s not equality, and it’s unChristian.  It is an ugly form of elitism.

This principle of the equality of all humans – including the equality of an individual human with himself (or herself) at different stages of his one life – should enable us to work out easily that we shouldn’t make exceptions to the general criminalisation of homicide.  There shouldn’t be any group within society that it isn’t a crime to kill deliberately.  All homicide is equally bad in consequence, because the people killed are all equal to one other.

It follows logically from the equality principle that we mustn’t allow, or should never have have allowed, people in the prime of life to kill either older human individuals such as their parents (a practice often referred to as “euthanasia”), or very young human individuals such as their unborn children (a practice called “abortion”, against which I have blogged extensively.)

Equality even for so-called “homophobic” people!

Are we still free to think and to speak  in a way that other people label as “homophobic”, i.e. free to express disapproval of homosexuality?  Free, that is, to think and to speak in this manner without the state or society imposing penalties upon us for such “thought crime” and “speech crime”?

This question is at the heart of the Gagged Dad case (A v Cornwall), in which judgment was handed down one week after the decision to call this snap election.  I worked on that court case case, and it has been reported on this blog, and twice in Christian Voice print edition (but only once on the Christian Voice website).

Hot on the heals of the judgment in A v Cornwall, there was a sudden spate of news stories in which the freedom, or the lack of it, of aspiring politicians to disapprove of homosexuality, again loomed large.   Best remembered is likely the story about Tim Farron.  The Rev David Robertson (who blogs as The Wee Flea) has written about this somewhat remarkable spate of news stories here.  (Wee Flee’s title for his blog post was, “Is gay sex a sin?”  His opening sentence: “It is apparently the burning question of the British General Election.”  That’s what I’d been thinking.)

To cap it all, in the past week or so, there have been three separate news stories about Asher’s Baking Company, in Northern Ireland (about which I have blogged): (1) a fresh allegation of the company turning down another  “gay cake” order; (2) the company reporting record profits in the most recent trading year; and (3) permission being given for Asher’s to appeal to the Supreme Court of the UK against the judgment of the Court of Appeal in Lee v Ashers.

“Hang on a minute!  Weren’t you a candidate in 2015?  For a different political party?”

Yes.  Actually, this is the fifth time I’ve stood for Parliament.

In 2015, I stood in North Cornwall, for a single-issue party called Restore The Family For Children’s Sake, describing myself as North Cornwall’s “Let every child have both parents” candidate.

In 2005, I fought three parliamentary seats, in the general election and in two by-elections, through an experimental,

My relationship with the CPA

Although I only got round to joining the CPA for the first time last year (2016), I had had dealings with the CPA a long time before that.  In 2004, the then CPA party leader, Cllr Alan Craig, kindly allowed me to speak at the CPA’s national conference and AGM.  (I brought several other guests with me to that CPA meeting.)  The conference pack included a leaflet that I had provided, about a single issue about which I had put on an exhibition at the Labour conference in Brighton earlier that year.

In 2015, this same Alan Craig, who had been the leader of the CPA, was one of the various people who made representations to his honour  judge Cotter in the Gagged Dad case (A v Cornwall), appealing for open justice.

I was also an ally during 2005, of the Rev George Hargreaves, who founded The Christian Party, whose website is here. Because the Christian Party is in an electoral pact with the CPA, whereby the two parties agree not to fight the same seats as one another, I naturally sought and obtained permission from The Christian Party, to stand in North Cornwall, after the CPA party leader asked me to stand here for the CPA.

The Christian Party is fighting 2 seats (both in Scotland) at this general election.

I do not ask you to vote for me, if your conscience tells you to vote for another candidate.  I do not expect to receive the votes of Christians, just because I am a Christian candidate, standing for a party with the word “Christian” in its name. On the other hand, just because a voter doesn’t call himself (or herself) a Christian, that’s no excuse for him to decide who to vote for, without bothering to find out what the CPA’s policies are.  (They really are like a breath of fresh air!)

You are welcome to visit the CPA website.  And please read the CPA manifesto and my election leaflet. 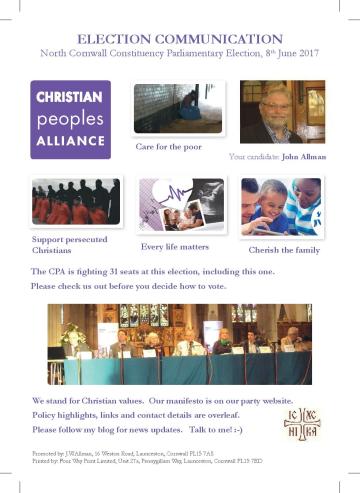 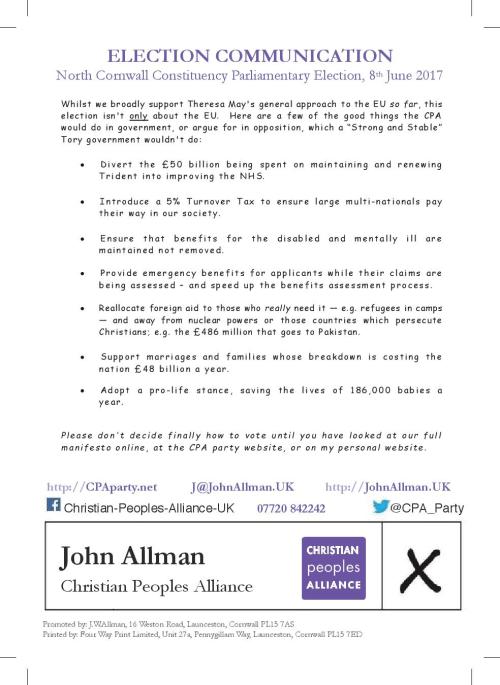