Dying for a drink 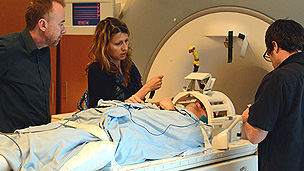 How easy it can sometimes be nowadays, to listen to a locked-in patient’s silent answers to questions! (If the doctor can be bothered, that is, because he cares what his patient thinks and is feeling.)

Dying for a drink isn’t a pleasant way for anyone to be forced to spend Christmas, but it is the fate chosen by his British NHS doctors, his wife, and the British judiciary, for one unfortunate Polish fellow, despite the objections of the Polish government and his Polish mother and two Polish  sisters.  This patient has been prescribed death by thirst. The slow taking of his life began yesterday, a Christmas present for him which he might well have said was unwanted, if only he had been asked.

To describe dying of thirst – not a nice way to go by all accounts (even when it’s not Christmas) – as “euthanasia”, is something of a euphemism.  But it appears to be the best treatment the British NHS can offer this unfortunate patient, or so they told the courts.  I am suspicious that the NHS didn’t try all that hard to discover the patient’s own preferences as to how and when he’d like to die.  As you will learn, if you continue reading, there was quite a lot the NHS could have tried, if they’d wanted to find out what the patient thought and how he felt about his situation.

The patient’s name has become something of an official secret, thanks to our notoriously secretive British ways.  I’ve been ready for the past 50 years to be sent to prison one day for blurting out the truth against the wishes of the state, but it won’t be this time.  I have to call the patient “RS” like the courts have been doing because I don’t know his real name myself yet.

The most recent court judgment, which left RS detained in an NHS hospital at the say-so of the British state, for the official purposes of ensuring his death there, preventing his transportation to Poland for less lethal medical treatment there as requested by the Polish ambassador, his mother, and his sisters, is here:

What does the patient think of the plan to dehydrate him to death?

Has anybody even bothered to try to find out whether poor RS is comfortable, as Scott Routley was asked? (See: How science found a way to help coma patients communicate in The Guardian.) Has anybody asked RS whether he consents to spend his last Christmas dying of thirst?  Shouldn’t the doctors ask RS these important questions of locked-in patients, taking the trouble first to hook them up to EEG, MEG or fMRI in order to ascertain their answers to the questions, as they did in the case of Mr Routley? Should RS not be granted such an accommodation that his present disabilities require, given his present locked-in state of consciousness?  The procedure (depicted, in the case of Scott Routley) doesn’t look to be too burdensome, even if the technology used is a bit on the expensive side.

Who are we killing?

One of those I am following on Twitter, Angela Ronson, is still officially categorised as “vegetative”. It is frightening to realise that Angela would not still be alive and well today, blogging as The Thoughtful Vegetable, if she had been treated as callously as RS is being treated now.

I'm functioning between the 2 ppl in the videos. I type. I'm talking now, but not as well as the woman. Also, I don't walk.
I AM VEGETATIVE! So what if I am writing n talking. I've done it for yrs. The article even mentions me. | Psychology Today https://t.co/DWqyRzG26q

I discovered Angela’s delightful and interesting blog because she responded to my blog post a few years ago, Talk to me, don’t just starve me to death!, in which I argued that patients like Scott Routley, Angela Ronson herself (as it happened) and (now) RS are entitled to be consulted directly about decisions to do with their treatment, using where necessary state-of-the-art techniques of the inference of thought from biological data, such as EEG and MEG (as documented here), or fMRI (as used with Scott Routley). It is shameful that this is not routine, largely because, I suggest, so much of the best research remains classified, leading NHS practitioners to think of what little published research there is as still in an early, experimental stage, every bit as unsuitable for compassionate application as (say) an unlicensed vaccine.

RS’s Roman Catholicism, unfortunately the primary focus of litigation so far, strikes me as nowhere near as important an issue in his life-or-death court case as the entitlement of anybody in his situation for the best possible efforts to be made to determine his wishes, accommodating his disabilities of communication, by the application of algorithmic thought inference from the patient’s physiological data.

On a personal note, I witnessed EEG in my teens and asked if it could be used to read thoughts.  At that time, it had not yet been discovered that human verbal thinking could be inferred from EEG data.  I had a EEG myself at the main Plymouth hospital during 2010.  The technician who administered my EEG was unaware of the military research of Lawrence Pinneo, published in 1974, into the inference of verbal thinking from EEG and MEG data, Feasibility Study for Design of a Biocybernetic Communication System.  I drew it to his attention. He had had no knowledge of the capability to read thought from EEG data.  (I, on the other hand, was the first to publish Pinneo’s work online, about sixteen years ago, although it is now published openly by the US military and many others.)

20 responses to “Dying for a drink”